It’s been a while since I wrote. But I think it’s necessary we clear the air. I have to admit lately we haven’t spent much time together. And I get the feeling you aren’t happy with me. I know, I know – you don’t want to hear the excuses. Because let’s face it – I found time to do just about everything else. (I even gave up sleep to fit it all in!) But sometimes it’s just very hard to find time for that run.

But you know what’s harder? Fitting in my favorite “skinny” jeans after I choose to spend an entire 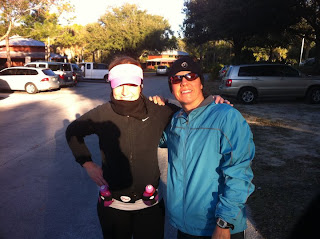 week drinking and partying like a teenager and avoiding that early morning run. Yeah. (Okay for the record – I call them skinny jeans – but that is a relative term. Not sure these hips would ever, ever be referred to as skinny! But you get my point!)

I noticed today, as I ran a slow but enjoyable seven miles that something felt slightly different. Did I leave something in my pockets? No. Clearly I must have packed something else in my fuel belt. Nope. What on earth…Oh – it was just my rear end! Apparently Running, you hold a grudge. And you aren’t subtle about it (Let’s face it – Shakira says it best -- these hips don’t lie!!)

So let’s make a deal. I admit that in December and January I relied on my Saturday and Tuesday staple runs, and anything else was gravy. Hmmm... Bad word choice. Any other run was a bonus. No more. I vow to spend at least four days a week with you Running. And in honor of Valentine’s Day – we are going to break out of our rut. Let’s reignite that passion! At least once a week I will either run some place new – or run with someone new. And I will hold myself accountable to this for the rest of this year. (The latter may be challenging. I might find myself pairing up with a stranger on the trail – but my new running group is quite large, so I may not have to go the stranger route till at least May!)

So Running – if I do this, and promise to even throw is some biking and swimming, will you please give me hips like Shakira’s? No? Okay. How about just letting me wear my skinny jeans again?