I Tri-ed: Olympic Athlete I am Not 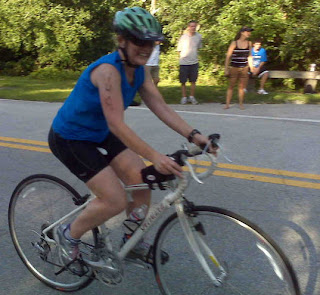 I completed my first Olympic distance triathlon on Sunday. I won’t lie. I thought it was hard. It was really, really hard. But getting to the starting line was almost as difficult as crossing the finish line. And I wondered – as I rode along the bike course alone – should I have even attempted this?

A bit of background – an Olympic distance triathlon is approximately shy of a mile swim (I can never really tell!), about 24 miles on the bike and about 6 miles running. In my case – all were slightly over. Call me an overachiever – but I always swim way too far away from the course, I missed my turn at the bike loop and I ran off the trail in the wrong direction for about 5 minutes on the run! This is all completely and sadly true.

But even without the mistakes, I think the distances are challenging And my eight-week training program was interrupted by life: multiple trips – both me and my husband (which means challenges in sticking to a schedule); holiday get-aways; and the stuff you don’t want to miss (class plays, birthdays and baseball games). It seems there has been lots of life this summer. I might have gotten a solid three weeks of training in – and the rest was DWYC (do what you can!). There is a reason you don’t see DWYC training groups marketed all over the country – the return rate would be 0%. Participants would routinely pass out on the course in the 93+ degree Florida heat - and vow to never do this again!

So, with my DWYC training under my belt – I registered for the tri just minutes before the deadline. And then an unexpected change in plans left me in search of a sitter for Sunday morning. Did I mention I needed someone at 5 AM? I considered just passing on this race, but one of my trusty teammates would not let me even consider that! So thankful for that push – err, gentle nudge – and for the good -hearted sitter who arrived at 5 on the dot!

But still –even with everything falling into place – I found myself on the bike course wondering if I should even be among this group of fit athletes. At least I assumed they were fit – I didn’t really see many of them as they were so far ahead of me! Doubt crept in – as it can easily do - and I started to come up with good reasons why it would be okay to drop out. I hadn’t done the right training. I have too much on my plate (coincidentally – I eat too much on my plate!) I wasn’t ready for this distance. I was quickly able to come up with dozens of excuses!

And then I started thinking about why I even wanted to train for this ridiculous event – and wondered would I trash my long-term goal of completing a Half Ironman? And I came up with several really good reasons to continue. (They better be good -- because when you come in near last – no one would blame you for walking away quietly!)

• Nothing helps me deal better with life than a hard run, a good swim, a long bike ride and a goal. (okay – maybe a glass of wine, too!)

• Because teams/coaches push you to be better. I would never push myself as hard if there wasn’t a group of people around me. This is what made my lonely bike portion of the tri so weak. My teammates and fellow racers absolutely inspire me and motivate me.

• And finally – the support I get from my training group is worth every drop of sweat I have lost on the trail. 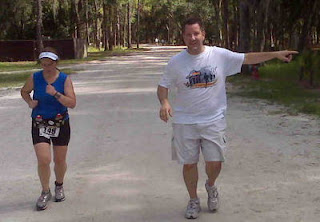 On mile 3 of the run, I was on a dirt trail in the woods. I had just passed a group of people who were loading their bikes onto their cars to go home. I still had 3 more miles to run and my legs were starting to cramp. Anthony –one of my teammates who completed his first triathlon the day before – and his wife, Emily were sitting on a log, ready to cheer me on! Everyone else on my team had passed already – but they waited for me! That alone was inspiring. But as my legs began to seriously cramp, and it seemed that I would need to walk the remainder – they both started walking with me! Then, as I was ready to run again – they ran along side me! By mile 4, Coach Jane joined us on her bike leading the way. And a half mile later, Coach Lea joined us, too.

Jane broke into a game of “Name that Tune” which quickly lead to a group sing-along of 80s TV theme songs! (And I learned that belting out a tune actually makes me run faster!) No doubt, any campers who saw us would have had a good laugh. As we were approaching the finish line – Lea encouraged me to pick up the pace – and crossed the finish line with me – while Jane, Emily, Anthony, Rebecca, (her Dad), Laura and Heather cheered me on. Now – I heard there were many spectators and music at the finish line. But the music was long gone – and so were those spectators. But thankfully – our team came equipped with our own entertainment – Jane’s sing-along and the best cheering section you could ask for!

At tonight’s swim training – Coach Lea asked if I would do another Olympic distance tri. Enthusiastically yes!!! Life won’t get easier, the commitments won’t go away and we will always have too much on our plates – but knowing the support I have from this group – someday there will be a Half Ironman race on my calendar! (Just hope our cheering section brings blankets and coffee – that will be a very very long day!)
Posted by Colleen at 8:21 PM 3 comments: