Going around those walls...

Someone call 911. My body was apparently hit by a very large truck, filled with angry elves, who took turns kicking and punching me while I slept. That’s exactly how I felt like when I stepped out of bed at 5 o’clock this morning.

The longer distances of training for the Half Ironman have caught up with me. Funny thing is, this week I started to feel a little more confident about my ability – especially on the bike. There is not one discipline I am really strong in, but the bike gives me hope! I am currently slow – but I think by September I might be upgraded to less slow! For me, that is a relatively short amount of time to see improvement.

So here I am, feeling more confident, actually starting to wonder which Half Ironman clothing I might buy at the Expo. What kind of 70.3 sticker will I get for the car?? What will I EAT when the race is done?? And then today... Instead of feeling like I’m at top of my game, I was feeling more like the bottom of a car tire! (Actually I think my car tires covered less miles than me this week!) 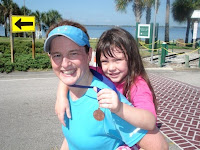 I’ve trained for enough races to know that crappy days and brick walls are all part of the formula. Someone reminded me, “It’s a triathlon, it’s supposed to be hard!” Thankfully, I’ve also experienced the complete euphoria of finishing a personally challenging tri. So I can dig deep and remind myself, those walls were just meant for someone else who doesn’t want this badly enough.

(*Celebrating with Caroline after my first triathlon - Pineapple Man June 2008)

If Only... How To Improve Your Tri Experience

The other day my friend was talking about how he could improve his triathlon finish time. As he looked over previous race times, the conversation went like this: “You see here, if I could just get faster on the bike – I could really improve the overall time. And look here on the run, you see, all I need to do is increase the pace and stay consistent.” And then, as he looked at the swim times, “If I could just get a bit faster in the swim… then I’d really improve my time!”

The magic formula – just get faster in all three disciplines and you will improve your time! Genius!

If it were only that easy…

There are definitely other factors that play into improving your triathlon performance. Nutrition, sleep and proper recovery. These are areas that I have flat out neglected. Over the years, I’ve never gotten the rhythm right. In fact, I’ve been pretty lousy about it - evident when I ended up in the ER after collapsing at the Women’s Half Marathon in November. The cause – dehydration. Probably also didn’t help that I didn’t sleep very much the week before, and not a wink the night before. 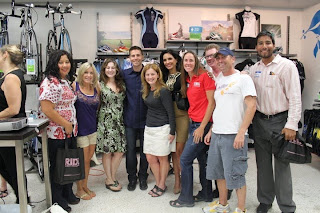 Jarrod Shoemaker, 2008 U.S. Olympic triathlete, says proper sleep is the most critical part of his training. Robbie Ventura, former pro cyclist, told a group at David’s World Cycle, sleep and rest were the most important part of his improved performance. There must be something to this sleep thing! But oddly enough, going to bed on time can be more difficult than getting up at 4:30 AM for a training!

Tonight – I will be in bed by midnight. Improvement indeed! (more like 12:30 - but that's still improvement!)

Another thing Jarrod swears by is massage 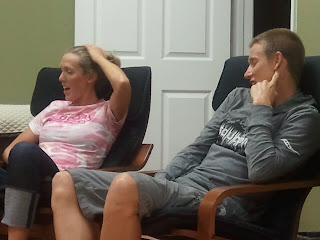 therapy. In an interview earlier this year, he told me about craniosacral therapy. He described it as one of the most relaxing and beneficial massages – especially the night before a race. This unique massage/ therapy somehow removes the tension and anxiety from his body, unlike anything he had experienced before.

Intrigued, I scheduled an appointment with Emily at West Orange Massage Therapy. It was two days before my first triathlon this year; I was in the middle of car buying negations; and I basically felt like I was carrying the weight of the world on my shoulders. We started with a basic muscle loosening massage… I chatted away, telling her about everything and anything until…. All of a sudden she did something to the back of my neck, and within moments I felt this release. Emotions and stress – as if they were tangible particles inside me – seem to rush through my body and pour out the back of my neck. It was truly like nothing I had experienced before. I wanted to tell her how amazing this was – but I literally could not speak. My body was so relaxed, I couldn’t talk! This was an absolute first in my life!

The following days I thought about the massage – and the emotions I felt afterward. I clearly needed another one – and soon!

My name is Colleen, and I am addicted to craniosacral therapy! It is by far the most relaxing therapy I’ve ever experienced. If you haven’t tried it – I really recommend it.

Now – did it make me a better triathlete? Not sure yet. Has it made me a better mom? A better car-buying customer? And an overall less stressed human being? I’d definitely say yes!

If you want to try it - now is the time! Living Social is running a deal (July 4th and 5th) for 50% off for new customers. (All massages and facials - not just carniosacral!)

Let me know what you think! And if you’ve had it before, how would you describe it?

Posted by Colleen at 8:42 PM No comments:

The journey to Augusta.... starts with a mess!

There are moments I wonder, what the hell have I gotten myself into? Today, I had a few of those moments.

I can’t really explain why I have a desire to complete a half Ironman race. It’s more of an emotional tug than a logical reason. Because if I sit back – I can’t see much logic to swimming 1.2 miles, biking 56 m and then taking on a half marathon (13.1 m) all in the same day – with just a few minutes transition in between. Certainly there are many on my team who seem born to do this – I am not one of them.

I’m not playing the defeatist or the “woe is me” character in this story by any means, but I will say I am incredibly surprised to be sitting here in my kitchen, with sore legs from climbing and sweating and huffing through 30 miles of hills this morning on my road bike. On legs that were already a slight bit sore from yesterday’s 10 mile run on Clay Road. Surprised because this is not a lifestyle I grew up with or intended to jump into. Anything with the name Ironman was not something ordinary people talked about – never mind signed up for! 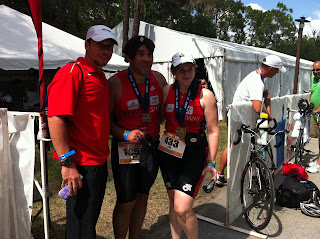 part ridiculous and part premature. But the thought wouldn’t go away. And then I went to the Florida Half Ironman at Disney to cheer fellow teammates on. The people I saw crossing the finish line were depleted. They were emotional. Their friends and families were emotional. Some were in pain. But they all did something that was truly extraordinary – they finished 70.3 miles! I was sold.

This vision flashed in my mind many times on Saturday as I completed one of my most satisfying runs ever. Mile 8.5 I picked up my pace. The endorphins kicked in as I looked over rows of incredibly dark green orange trees, caught a glimpse of the lake and waved at a field of cows. They didn’t wave back, but I didn’t care. I was on a runner’s high. And all I could think was I KNOW I CAN COMPLETE THIS RACE.

That feeling of confidence/self awareness/joy was a small, but truly significant moment. Why? Because that moment helped me finish that bike ride today. And that moment will get me back on those hills one morning this week. And that moment will keep me on track towards the goal. And every time I think, “What the hell have I gotten myself into?” I’ll think back to that eighth mile on Clay Road; which, ironically enough, was big old mess!